In 1842, the Canadian government established the Geological Survey of Canada (GSC). The mission of the GSC was to map Canada’s geology, with the goal of producing its mineral resources. The information collected by geologists and engineers over the past 1

The Geological Survey of Canada (GSC) has issued a variety of publication series over the years.  Many of these series comprise a set of related reports, each treating its own topic, some with associated maps.

These items were collected by different groups and libraries within the Queen's system over the years, and they have be described differently based on their original locations.  One of the goals of our project is to standardize and improve the way these items are described in our catalogue to make them easier to find.

Improving how GSC publications are described

Prior to our project, GSC series held at the Engineering & Science library were described only by one record in the catalogue for the entire set.  This was great if, for example, you wanted to find all issues of the Memoirs.  However, if you were looking for information on a topic that happened to be treated by one of the Memoirs, but you didn't already know to look there, the library catalogue record wouldn't have been much help.

On the other hand, while series held in the Government Documents collection at Stauffer Library had library catalogue records for each individual issue, the records were brief and didn't provide much description to help users find them.  Here is an example of one of those brief records, from the Miscellaneous Report series.

In the example of Rocks and Scenery of Terra Nova National Park, the item is identified as part of the Miscellaneous Report series, is described as having somewhere between 11 and 49 pages, and has a person associated with the report—perhaps the author? This doesn't provide much for users to try to match in their search results, but having the record still provides a bit more information than a single record for the series with the title "Miscellaneous Report".

Records for the Memoir, Bulletin, Paper and Economic Geology Report series have now been upgraded with richer descriptions, like the following example: 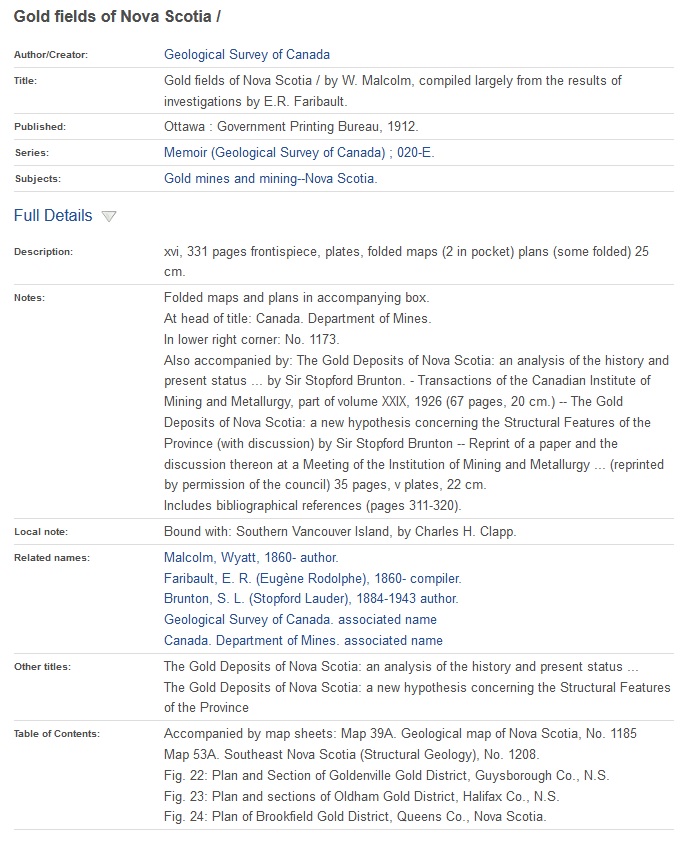 Many improvements can be seen in the example Gold fields of Nova Scotia—just make sure you expand the "Full Details" section once you are viewing the record in the catalogue. The date of publication is clearly indicated, as is the number of pages, giving you an idea of the extent of the information inside.  A subject heading has been assigned, allowing the item to be found when searching more broadly by topic, and a variety of alternate titles and associated names from authors and compilers are included.  Of particular note is the inclusion of a list of the associated or accompanying maps.

Leveraging the benefits of series and issue records

We acknowledge that some users may still be interested in finding a series by the series title, so we have retained the series-level records, and also updated them to make it easier to move between the record for the series and those for all of its issues.

For example, here is the first few fields of the series-level record for the Memoirs:

In upgraded records, there is now a hyperlink in the "Series" field that will take you to a list of all items associated with the Memoir series that have been described in our catalogue, with the record for the series at the top of the list.  If you look at the earlier example of Gold fields of Nova Scotia, you'll notice that there is also a hyperlink in its "Series" field. This hyperlink will take you to the same list of items as the link from the series-level record.  Don't just take our word for it though.  You can try it out yourself.